This article is dedicated to Fred Goldhirsch (d. May 15, 2010), The Right Move’s founder & inspiration.

It was shortly after the Nazi rampage of Kristallnacht that a young Fred Goldhirsch and his family fled Vienna, Austria, eventually settling in the U.S. By 1944, Fred was an American soldier in the Army Corps of Engineers, serving in Normandy and searching for the Nazis who had terrorized his family (he didn’t find them).

After his tour of duty was concluded, Fred entered the real estate business and eventually became a highly successful developer in New York. An avid chessplayer, he earned a seat on the board of directors of the now defunct Manhattan Chess Club. He notes that “They always had a shortfall financially, so some of us would kick in a few thousand dollars a year.” 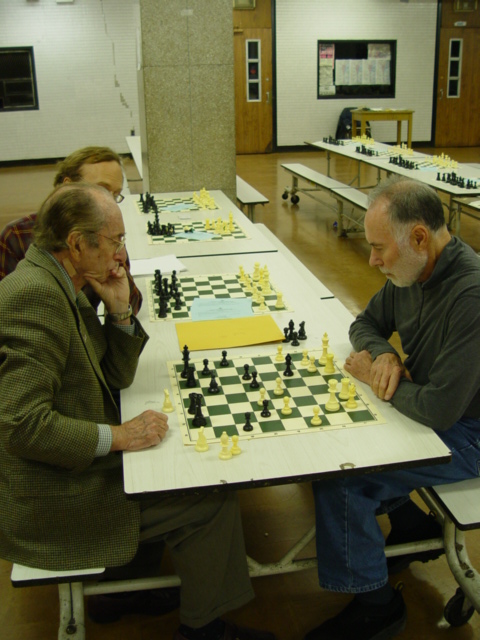 Impressed with the positive impact that chess can have on the discipline and thinking processes of children, Goldhirsch suggested that the Manhattan Chess Club be transformed into a non-profit charitable organization that would offer free programs to New York City youngsters. Besides being a positive influence on the community, this would also allow the club to accept tax-deductible donations. However, Fred explains, “these suggestions stalled, so I took it from there, with the permission of the Manhattan Chess Club.”

In October 1990, Goldhirsch joined with fellow board member Norman Friedman to found the Right Move organization as a division of the Manhattan Chess Club. Former club president and national master Doug Bellizzi assisted in the process and remains active in the rganization.

Goldhirsch insisted that all programs be available at no charge, and this remains a cornerstone of Right Move to this day. As such, they have always run a tight ship, with all officers serving in an unpaid capacity. There is no overhead and no paid staff, although chess teachers and tournament directors are paid for their services, primarily through the generosity of Goldhirsch himself.

Right Move began by providing teachers for free classes held at the Manhattan Chess Club. Fred said that “We had good teachers but were only drawing about ten to twenty kids at a time, which was not too inspiring. We thought that maybe the kids didn’t have enough money for the subway fare, so we even began providing free subway tokens. But then we had a tournament and this drew 60+ kids, so we realized that this is what they want.”

While still continuing to provide chess classes through their network of teachers, Right Move began emphasizing their free tournaments for kids under age eighteen throughout the New York area. Since it costs $14,000 to place one teacher in one school for the school year, it has proven more cost-effective to concentrate their efforts in providing the Right Move series of free tournaments.

Fundraising has always been difficult, with occasional donations coming in from various foundations and individuals. With help from Executive Director Eliot Weiss, Yoko Ono was one of the contributors at one time, but at present, virtually all of the funding for Right Move comes from Fred Goldhirsch.

In 2002, Right Move became a separate foundation known as the Right Move Chess Foundation, Inc. Continuing to safeguard Right Move’s precious funds, Goldhirsch was able to obtain the accounting and legal work setting up the foundation at no cost.

Executive Director Weiss laments these latter charges, stating “As always, the NYC Department of Education wants to charge us rent for giving kids free tournaments with no strings attached. We are not making any money from this and it is totally non-profit.”

Goldhirsch credits Weiss for being a tireless advocate for Right Move, and is pleased that at least the Education Department has reduced their normal fees. It is estimated that between three and four thousand kids attend the various Right Move events annually. Some of the youngsters from the earlier years are now masters and a number have gone on to assist the Right Move program as tournament directors (TDs) or assistant TDs. One such player, who was one of the first Right Move participants back in the days when it was based at the Manhattan Chess Club, recently held a satellite Right Move tournament in the Bronx. It was his way of thanking Goldhirsch for the programs that he said had turned his life around. If fact, Goldhirsch encourages players to become TDs. He noted that when a player has been a fixture at Right Move tournaments for a few years, around the time they turn sixteen, they may be offered a job assisting at these events. As Goldhirsch explained, “This provides a little income for the kids (maybe $50 for a partial day’s work) and introduces them to the concept of a paycheck.”

Fred Goldhirsch is a big fan of the many benefits that chess has to offer, and a big fan of Right Move specifically. “I like the program a lot” is a phrase he repeats often. “Chess is a wonderful game,” he stresses. “It teaches kids to think more deeply and to be more careful in the actions they take.” He says that in chess, making a bad move has consequences, and the obvious hope is that kids make the connection that life works the same way.

Goldhirsch said that sometimes, he’ll see a young child playing in his first chess tournament, and he compares it to a fish biting bait – he can really get hooked. It’s possible the player may receive a free USCF membership, paid for by Right Move. When the child sees his initial rating, and compares it to that of his friends, he may become motivated to make a real effort to improve. He’ll take the time to study books and practice, and gradually will come to the realization that hard work pays off. These are the kinds of lessons Goldhirsch wants to impart and what keeps him motivated to continue supporting Right Move.

Despite charging no entry fees, Right Move offers a variety of prizes at their tournaments. Kids may walk away with free USCF memberships, trophies, monetary prizes, t-shirts, medals, hats, and bags – enough to brighten their day and to encourage them to continue to work at developing their talent.

Realistically, Goldhirsch notes that many kids go through the Right Move events, and in most cases, it is not clear at all if chess is making a real difference in their lives. But he is quick to add that even if only a few kids benefit in a major way, that alone makes all the time and effort worthwhile.

Executive Director Eliot Weiss is also the coach of the famed Edward R Murrow High School chess team, which has won or tied for the past four national high school chess has helped my team tremendously, giving all my players an opportunity to play in two USCF rated tournaments every month for free for many years, even before they came to Murrow High School. It gave them a more serious approach to playing tournament chess and improved their skills.”